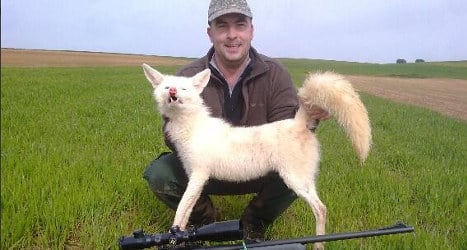 One of the images of the dead albino fox which has caused the controversy. Photo: Twitter

The pictures in the paper's hunting section show José Antonio García of Spain's northern Burgos region posing with his high-powered rifle and the dead creature.

García — who says he is "happy" to have received so much attention in the press — was out hunting for deer with his brother in May when he spotted the albino red fox.

"Jose Antonio García, after stalking the fox, got it in the centre of his sights and with a single, accurate shot, did away with the unique specimen," Marca reported.

"Of course it's already at the taxidermist's" where it will "preserved as a souvenir of a unique, totally legal, experience in the life of a hunter," the sports daily added.

The story remained on the Marca for months but recent uproar has seen the newspaper take down both the offending article and the pictures.

Meanwhile, the reaction on social media has been intense.

"Incredible. An albino fox, and they kill it and Marca says how great it is. We're definitely doing something very wrong," tweeted César Antruejo.

Another Twitter user, Jesús Morata Hurtado wrote: "Two unique creatures — an albino fox and the neanderthal holding it up proudly."

"They are boasting about killing a unique white fox during a hunt. Should we investigate (environmental agency) Seprona?" asked Twitter user @aguadillas.

But Angél López of Spain's Royal Hunting Federation defended both the hunting of the fox and the posting of the images.

"Killing foxes in Spain is completely legal," said the spokesperson for the organization which represents Spain's one million or so active hunters.

"There is no law that stops you killing albino animals," López told The Local.

"Hunting is crucial, both economically and environmentally," he added.

"Without hunting, booming animal populations would threaten the country's ecosystem."