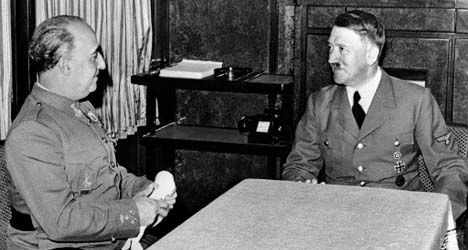 Spain’s Franco and Germany’s Hitler had something else in common apart from their right-wing political views. Photo: OFF/AFP

“The ‘Generalísimo’ had two of the main traits found in cold-hearted personalities: Oedipus complex and paternal abuse,” the dictator’s doctor told Pilar Eyre, author of the biography Franco Confidencial.

According to Eyre, Franco’s upbringing was marred by the disturbing relationship he had with his father.

“The day he was born, his violent and alcoholic father Nicolás was in a whorehouse”, reads a quote from the book.

Spain’s future nationalist leader had to withstand the abuse of his progenitor throughout his unhappy childhood.

Franco Senior picked on his son’s feeble figure and high-pitched voice, calling him names like “Paquita” (female version of diminutive of Francisco/a) and “marica” (homo).

Young Francisco idolized his mother as a result, even going as far as asking her to marry him when his father left the family for another woman.

But the soon-to-be dictator was to marry the young Carmen Polo, who was fifteen when they met.

They had a long-distance relationship while Franco, by then in the army, was in Morocco fighting to keep the Spanish enclave of Melilla.

There he lost a testicle, presumably in battle, which may have been the beginning of his prolonged sexual shortcomings.

“My ample experience in this field leads me to believe his sexual life was nonexistent.

“I advised him to undergo a very simple operation but he refused.

“He wasn’t interested in sex, he silenced his desires with his hunger for power and was therefore able to remain celibate almost all his life.

Franco’s high aspirations inevitably paid off, as he rose through the military ranks as a prodigious and fearless young soldier to eventually become the head of Spain’s nationalist faction in the civil war which was waged between 1936 and 1939.

After their victory, he became the country’s military dictator until 1975.