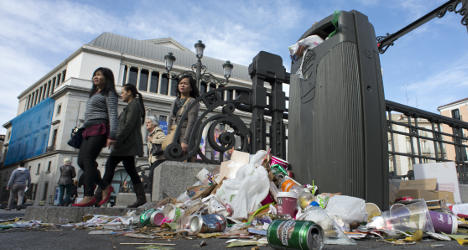 "Madrid has no money left, not even for cleaning the streets," Germany's influential Frankfurter Allgemeine newspaper wrote on Tuesday.

The daily said people in Madrid are "suffering their way through the garbage strike".

More importantly though, the FAZ said the Spanish capital was enduring the failed leadership of city mayor Ana Botella.

The paper recalled Botella's comments that people in Madrid had got used to a standard of cleanliness that was a "a bit too high", and mentioned that the mayor had said the city's cleaning firms could adapt to the new lower salaries and limited staff numbers.

The paper then sank the boot into a city with "the blues" after its failed Olympics bid and with projects like the massive Eurovegas casino project in flux.

The comments from the German paper com as unions put adherence to the Madrid cleaners work stoppage by street cleaners and public park gardeners in the Spanish capital at 97 percent.

"There is a massive following. This conflict will go on for a while. There are no talks," said a spokesman for the UGT labour union, Juan Carlos del Rio.

Unions are angered over plans by companies that provide cleaners for the city's streets and public gardens to slash 1,135 jobs out of a total of around 7,000 and cut their salaries by up to 40 percent.

The companies had already laid off 350 workers in August. They said cuts were necessary since the city hall, under pressure to reduce costs like public authorities around Spain, was spending less on cleaning.

A pile of rotting and burned garbage was sprawled around a row of garbage bins that overflowed with torn garbage bags, cardboard, beer cans and food scraps by a school in the trendy Malasana neighbourhood.

Two policemen discreetly accompanied a crew of street sweepers who were providing minimum services nearby.

"This is not right. I have never seen this before. All the bins are empty and the trash has spilt out, this is crap and it has gone on for several days now," said Dominica Soria, 46, as she passed by.

Madrid city hall announced Sunday that it was boosting municipal police patrols to ensure that workers were able to carry out minimum services, which were set at 40 percent for street sweepers and 25 percent for garden workers.

Over 60 police patrols will be carrried out every day to ensure that street cleaners are not prevented by their striking colleagues from providing minimum services, Madrid city hall said in a statement.

Almost 260 rubbish bins have been burned since the  start of the strike on November 5th, it added. Seven people have been arrested.