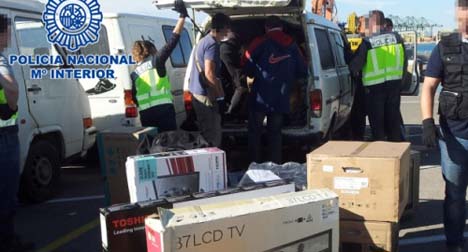 The gang would launder their profits by buying luxury goods and alcohol which they would then transport back to Nigeria in vans. Photo: Policia Nacional

Twenty-five people have so far been arrested in Madrid, Toledo, Palma de Mallorca and Cantabria.

According to Spanish national police, the gang used an elaborate money-laundering scheme which allowed them to send back their profits to Nigeria in more than 100 vans.

They would first buy luxury goods and alcohol, stack the vehicles to the brim with all products, weld the doors and use dark-tinted windows.

Up to now Spanish police have found €5 million ($6.6 million) worth in goods in 94 vans seized in Madrid and Valencia.

As for the prostitution ring, gang members recruited women in their native Nigeria before flying them to Mexico and Brazil with false identity cards.

From there, they were flown to Paris, where they would then be smuggled into Spain to work as prostitutes.

Spanish police caught one gang member performing an abortion on one of the five women who has been freed.

Officers believe the gang was formed in Nigerian universities in the 90s and has also been involved in other illegal activities including internet and credit card fraud.