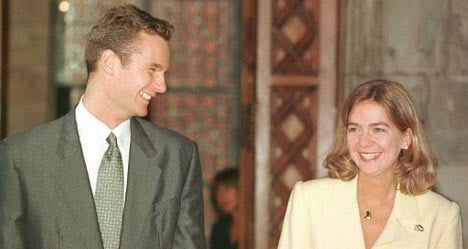 "What do your brother Prince Felipe and Real Madrid have in common? Eih? Eih?" Iñaki Urdangarin and Princess Cristina in 1997. Photo: Dominique Faget/AFP

Could things get any worse for Iñaki Urdangarin, Duke of Palma?

The husband of Spain’s Princess Cristina has been one of the country’s main public enemies since an investigation began in 2010 into his alleged embezzlement of €6 million of public funds.

The couple’s life has been under the microscope ever since, with Spain’s press revealing new insights into the degree of illicit business practices both were involved in.

Now emails from Urdangarin’s computer seized as part of the ongoing investigation reveal to some extent what the disgraced Duke is like as a person.

His sense of humour has been described as “tasteless” and “chauvinistic” by El Mundo, the first Spanish newspaper to publish Urdangarin’s email correspondence with Princess Cristina.

The butt of some of his jokes is Letizia, Princess of Asturias and wife of the heir to the throne, Felipe.

“What do Prince Felipe and Real Madrid have in common?” wrote Urdangarin to Cristina in the wake of the Princes of Asturias’ engagement.

“They both fuck Alaleti (a play on words which refers to both the shortening of Letizia’s name – Leti – and how Atlético de Madrid are casually known – Atleti).

In another email Urdangarin sent his wife a photomontage of famous Spanish newsreaders, including Letizia before she took on her royal role, under the title “orgasms”.

The Duke of Palma also mocked Jaime de Marichalar, the husband of his sister-in-law, Elena, with a mock-up that compares his attire to that of Inspector Clouseau and Inspector Gadget.

Another joke photo shows Queen Sofía and other royal family members looking bored at a sporting event at the Athens Olympics in 2000 under the title “Spanish Royals’ Holidays”.

Urdangarin also reveals a sexist side when forwarding his wife a joke about women's inability to understand modern technology that suggests an iron could be used as a prototype computer mouse.

He also sent his friends a spoof email alleging he was taking on a job with an NGO, attaching a photo of six topless girls with rifles as his “team”.

Spain's Royal Family have been beset by scandals in recent times.

The country's King Juan Carlos came under fire after it emerged he had gone on a luxury elephant hunting holiday in Botswana in 2011, or at a time when one in four Spaniards were out of work.

As a result, the popularity of the king — widely respected for his role in helping Spain transition to democracy after the death of long-term dictator Francisco Franco — has taken a tumble.