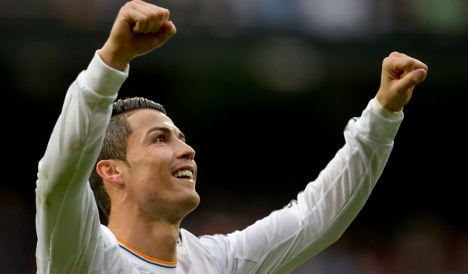 Ronaldo's treble took his tally to 24 goals in just 17 games this season as Real moved to within three points of La Liga leaders Barcelona with the Catalans not in action until Sunday.

"He has a level from another world. He scores with an incredible ease and it is difficult to find words for him," said Ancelotti.

Ronaldo fired the hosts into the lead from Karim Benzema's pass before roles were reversed as the Portuguese squared for the Frenchman to slot home.

The former Manchester United man then dispatched a penalty past Claudio Bravo for his second of the afternoon before Gareth Bale provided his fifth assist in four games for Sami Khedira to smash home a fourth before half-time.

Antoine Griezmann then reduced the deficit for Sociedad after the break, but Ronaldo had the final word as he curled home a wicked free-kick 14 minutes from time to seal his hat-trick.

Ancelotti was delighted with what he saw as arguably the best 45 minutes his side have produced since he took over in July.

"I think that the first-half was perfect. We played very well, with pace, efficiency in front of goal, sometimes we played long, sometimes short, but it all worked well," said the Italian.

"In the second-half the tempo was slower, but that is normal when you are 4-0 up. We had a few more defensive problems, but overall the defence was also very good."

Victory was Madrid's third in four games since Xabi Alonso returned from injury and Ancelotti was also keen to laud the contribution of the Spanish international to the overall balance of the side alongside Luka Modric and Khedira in midfield.

"All three central midfielders played very well today. They complement each other and helped the team."

"I have said many times that Alonso has the experience and the quality to make us play how we want. It is obvious that he is a very, very important player."