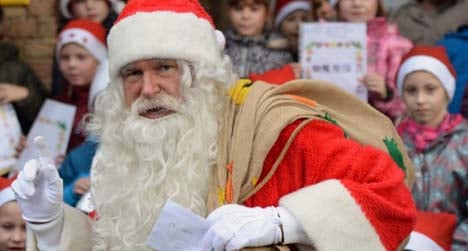 The average Spaniard will spend €59 ($80) less this Christmas than last year, or around €455. Photo: Ralf Hirshberger/AFP

Go back five years in time and you would have seen the streets of any major city in Spain packed to the brim with last-minute shoppers willing to splash out on whatever their friends and family wanted.

Fast-forward to the present and, although the hustle and bustle is still there, the number of shopping bags stuffed with presents has gone down dramatically.

Christmas spending is expected to fall 11.5 percent this year compared to 2012 figures, says the Federation of Independent Users and Consumers (Fuci).

“The crisis continues to wreak havoc, which has provoked a sustained easing in spending amongst Spanish families,” says Fuci president Gustavo Samayoa.

The average Spaniard will spend €59 less than last year, approximately €455.

Leisure spending, which includes everything from hotel stays to family activities, will endure a staggering 71 percent drop this Christmas.

Spain’s once evergreen Christmas lottery, which sees thousands of crisis-hit families putting their hopes on the multimillion El Niño and El Gordo draws, will also experience a 21 percent drop in participation.

It’s also likely there will be fewer presents under the tree this Christmas, as Spaniards are set to dole out 8 percent less for toys and gifts than last year.

Spanish mums are however still set on providing the best possible Christmas feasts for their families, with food expenses likely to see the smallest drop in all spending categories.