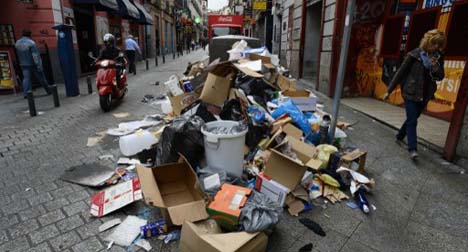 Madrid's city streets are definitely not paved with gold at the moment. Photo: Pierre Philippe Marcou/AFP

Public bins overflowed with drinks cans and cigarette ends and central squares such as the Puerta del Sol were strewn with waste paper as the open-ended strike entered its third day.

"This is shameful. This is Madrid, and it's full of rubbish!" said one local woman, Rosa Aguilar, 46, pointing at the mess on Plaza Jacinto Benavente.

"This is no way to protest. It will get us nowhere," she said.

That square is home to a local curiosity: a metal statue of a street sweeper. A popular photo opportunity for passing tourists, on Thursday he had accumulated waste paper under his broom.

The strike does not involve the workers who collect bags of household rubbish, so the mess in Madrid had not yet reached the level seen during bin men's strikes in cities such as Jerez and Granada this year and last.

The Madrid street-cleaners launched an open-ended strike on Tuesday as The Local ran a piece giving US reactions on just how clean Madrid was compared to New York.

The strikers are protesting against layoffs and pay cuts prompted by the economic crisis.

The companies that provide cleaners for the city's streets and public gardens have announced 1,100 job cuts — about a fifth of their total staff — while some workers will have their salaries cut by 40 percent, the unions said.

Another local crossing the Plaza Jacinto Benavente, Jose Antonio Zaragoza, 51, said he tolerated the mess because he sympathised with the cleaners.

"I think we have to support the people who are on strike," he said. "This is a consequence of the policies of politicians who really care nothing for the citizens."

The strike "will continue as long as necessary until they stop this madness," said a spokesman for the UGT labour union, Juan Carlos del Rio, on Tuesday.

The companies had already laid off 350 workers in August. They said cuts were necessary since the city hall, under pressure to reduce costs like public authorities around Spain, was spending less on cleaning.

The chairman of an association grouping the five municipal cleaning companies, Francisco Jargon, said Tuesday there was "no solution in sight" to the dispute since the unions refused to negotiate on the terms of the cuts.

"Madrid is going to get filthy," he said.