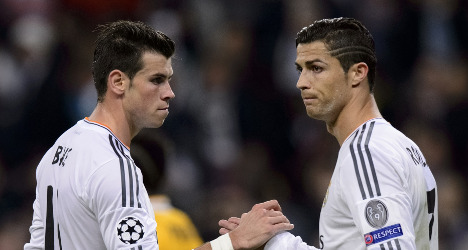 The Welshman opened his Champions League account for the club he joined for a reported 91 million euros ($122.8 million, £76.4 million) in September with a wonderful strike in Madrid's 2-2 draw with Juventus on Wednesday that all but secured the Spanish side's place in the last 16.

Bale also scored twice and provided four assists in Real's previous two games against Sevilla and Rayo Vallecano as he, Cristiano Ronaldo and Karim Benzema begin to forge a deadly combination up front.

Ronaldo was also on target in Turin to take his tally for Madrid to an incredible 222 goals in just 215 games and he believes Bale is beginning to find his feet.

"He is very important for us and I think he is going to help us a lot.

Things are going well for him at the minute," Ronaldo said.

Ronaldo has already found the net 21 times in 16 games this season but insists his personal statistics will mean nothing if Madrid end up empty-handed again come the end of the campaign.

And with Los Blancos already trailing Barcelona by six points at the top of La Liga, he knows there is little room for error against their Basque visitors on Saturday.

"Personally, I am very happy, I am in a very good moment in my career. All my teammates and the fans are supporting me.

"I try to do my best every year and I need to demonstrate that I am a great player and give my best.

"Records don't excite me. What excites me is that I want to win things, I want a future that is better than the present."

Ronaldo, Bale and Benzema are expected to start once more up front, and Sergio Ramos is Ancelotti's only major absentee as he is suspended so Dani Carvajal or Alvaro Arbeloa will return at right-back.

Real can provisionally close to within three points of Barca and two of Atletico Madrid with a win as neither of the top two are in action until Sunday.

The Catalans travel to struggling Real Betis boosted by the return to scoring form of Lionel Messi, who found the net twice in Wednesday's 3-1 win over AC Milan to book their place in the knockout stages of the Champions League.

Messi has gone four games in La Liga without scoring for the first time in over two years, but he believes it has just taken him some time to recover from two muscular injuries he suffered earlier in the campaign.

"I'm calm about my recuperation from injury. I'm getting my rhythm back bit by bit and I think it really helps to have 90 minutes, then another 90, back to back so I can gradually re-establish the tempo and the form I had before the injury," he told Uefa.com.

"It just helps physically. This time there have been two injuries really close together and that kind of impact you do notice. But I'm definitely getting past it and I'm happy with my form."

Gerard Pique is the only major doubt for Gerardo Martino's side as he continues to struggle with a groin problem so Carles Puyol could partner Javier Mascherano in defence.

The game of the weekend, though, sees in-form Atletico travel to fourth-placed Villarreal.

Atletico also booked their place in the Champions League last 16 on Wednesday with a 4-0 win over Austria Vienna with Diego Costa netting his 16th goal in as many games this season.

And Costa's fantastic campaign continued on Thursday when he was called into the Spain squad for the first time by coach Vicente del Bosque.