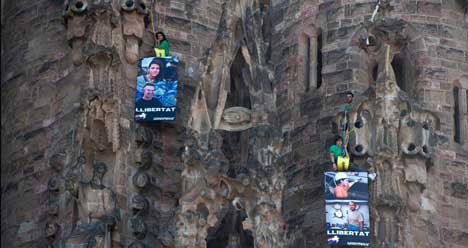 Activists hung posters showing photos of the 30 Greenpeace members arrested by Russian police 50 days ago after they attempted to chain themselves up to a Gazprom oilrig. Photo: Greenpeace

Ten Greenpeace activists clambered up the 19th century church at 9.30am on Friday until they reached the steep façade designed by Catalan architect Antonio Gaudí.

There they hung posters showing photos of the 30 Greenpeace members arrested by Russian police 50 days ago after they attempted to chain themselves up to a Gazprom oil rig in the Pechora Sea.

Their placards read ‘freedom’ in English, Catalan and Spanish under the pictures of the activists who have come to be known as the Arctic 30.

Barcelona firemen and police were quick on the scene, preparing inflatable platforms 90 metres (300 ft) down below in case any of the hanging activists were to fall.

By 11am, some of the protesters began entering the cathedral and were duly arrested by security personnel.

Greenpeace spokesperson Luis Ferreirim told Spanish daily 20minutos they had chosen the Sagrada Familia because of its international recognition and to ensure their message reached the maximum number of people possible.

Russian investigators have since accused several of the 30 Greenpeace activists already charged with piracy with "other grave crimes" after claiming they found drugs on their ship.

The environmental group vehemently denied the charge that their vessel, the Arctic Sunrise, had carried illegal drugs, calling the allegation a "smear."

Two journalists and 28 activists have now spent 50 days in custody since they were seized aboard a Greenpeace boat.