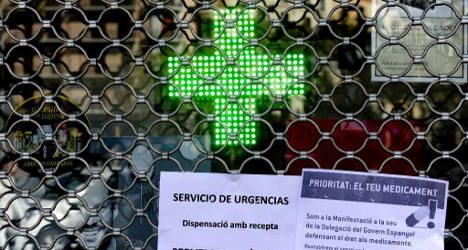 A notice on the gate of a closed pharmacy in Barcelona reads "Emergency Service" on Thursday during a strike against the non-payment of the Spanish government.Photo: Josep Lago

Pharmacies put up notices on their shutters informing clients that they would be closed for half the day across the region of roughly 7.5 million people.

Hundreds of pharmacists, many wearing their white lab coats, marched through the streets of Barcelona, the capital of Catalonia, to demand that the Catalan regional government pay its bills to pharmacies.

The regional government has not paid pharmacies for prescription medicine issued under the public health system in November and December 2012 as well as in May and October 2013.

It owes pharmacies €416 million ($562 million), according to the Catalan Order of Pharmacists.

"We demand that this debt be settled because we can't take it any longer. We are at the breaking point," the president of the organisation, Jordi Dalmases, told reporters at the Barcelona protest.

Emilio Moliner said he had to take out a loan of 100,000 euros and mortgage his Barcelona pharmacy for 170,000 euros because the regional government owes him nearly €300,000.

"The duties of a pharmacist do no include financing the medication of customers. If this continues, we will have to stop giving out medication," he said.

One pharmacist held up a cardboard sign at the protest that read: "Honk for your medicine".

"They are playing with people's health," said Macarena Alsina who has owned and operated a pharmacy for seven years as she fought back tears and lit a cigarette.

"You are constantly struggling morally because you know you have to provide the medicine but at the same time you are putting your business and your home at risk."

Catalonia had to go cap in hand to Madrid in January to ask for €9.07 billion from a fund to help debt-laden regions.

Spain has promised the European Union it will rein in its overall public deficit to 6.5 percent of output this year.