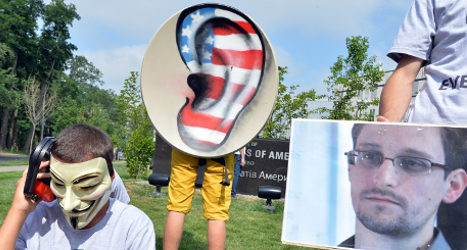 Activists protest outside the US Embassy in the Ukraine against the US Internet surveillance program exposed by former spy Edward Snowden (on photo at R). File photo: Sergei Supinsky/AFP

"We don't sure data that we have about Spanish citizens with anybody, " stressed CNI director Félix Sanz during a session held behind closed doors in the Spanish parliament.

The spy boss said information sharing with its ally had intensified after the September 2001 terrorism attacks on the US, Spain's El País newspaper reported.

Metadata was collected on calls and provided to the US in relation to specific cases, he added.

Sanz also stressed he was "99.9 percent" sure the US hadn't spied on Spanish Prime Minister Mariano Rajoy.

He admitted, however, that Rajoy may have spoken to people with tapped phones, as may have been the case with Germany's Angela Merkel.

The comments from Spain's spy chief come in the wake of reports of widespread US spying in Spain in the Spanish press. Those reports were based on information leaked by US spy contractor Edward Snowden.

Those reports followed from similar reports on US spy activity in other European countries, leading to increased tensions in diplomatic relations between Europe and the US.

During the two and half hour hearing on Wednesday, the CNI director also attempted to assure the country's MPs that Spain's secret services always operated within the law.

The CNI doesn't "take shortcuts or go out hunting", he said.

Asked whether US spy services had done likewise, Sanz replied: "They are governed by their own laws."

His only direct criticism of the US was that they hadn't "kept custody of the information received" from Spain, and had allowed it instead to be leaked.

Spain's public prosecutor opened a preliminary investigation in late October into reported mass US eavesdropping on millions of telephone calls to determine if a crime was committed.