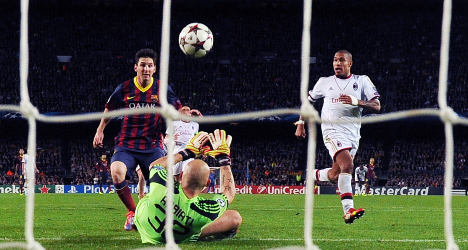 Messi ended his drought with a first-half penalty and then scored a second for the night with a lovely dinked finish over Christian Abbiati. Photo: Lluis Gene/AFP

But he ended his drought on Wednesday with a first-half penalty and then took his tally to six goals in just three Champions League appearances this season with a lovely dinked finish over Christian Abbiati seven minutes from time to seal the three points.

"I always saw him in the same way. Evidently, making comments about Leo when they are negative has its risks," said Martino.

"He played a phenomenal game. He had spark, speed, ability in one-on-ones, everything. He is one of the few players in the world that you have to be careful with when you see him in a bad light because he can turn everything around in three days and put in a performance like today."

Victory moved Barça onto 10 points after four games, five ahead of Milan with Ajax and Celtic one and two points further back respectively.

And with progress to the knockout stages assured, Martino wants to wrap up first place in the group when Barça visit Ajax in three weeks.

"To finish first is what we are looking for. Moreover, one begins to think, because there are no great surprises in the groups, that the favourites will be the group winners, but you never know who you might draw.

"What most interests us is finishing first to feel better in ourselves. More for our confidence than thinking about the future."

For Milan boss Massimiliano Allegri it was another disappointing evening as, after an awful start to their domestic campaign, the Italians slipped to their first European defeat of the season.

However, he congratulated his players for staying in the game until the final 10 minutes and is still confident of progressing along with the Spanish champions come the end of the group.

"The team played a lot better in the second half and we had various opportunities to equalise if we had been a bit better with the final pass," he admitted.

"I have to congratulate the players because it is never easy to play against Barcelona and it hasn't harmed our chances in the Champions League."

A huge part of the reason for Milan's turnaround after the break had to do with the introduction of Mario Balotelli from the bench after he had been surprisingly left out of Allegri's starting line-up in favour of Robinho.

However, Allegri defended the decision by highlighting Balotelli's lack of form and fitness so far this season.

"Balotelli is a very important player for us, but he also made a few errors in the final pass. He still has a lot to learn and we expect a lot more from him."