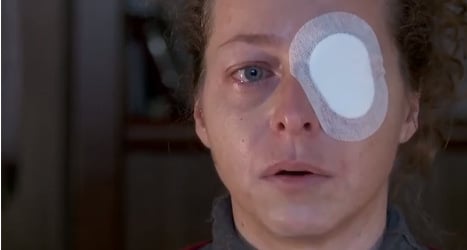 The Catalan government launched a review of weapons used by the police during demonstrations after Ester Quintana (pictured), was injured in 2012. Screen grab: YouTube

The decision comes after a woman was blinded in her left eye at a protest in Barcelona during a general strike on November 14 last year after she says she was struck by a rubber ball fired by police.

Two members of Catalonia's regional police force, the Mossos d'Esquadra, are under investigation over the incident, but Catalan police and the regional government have denied that rubber balls were used during the protest.

The balls, fired from guns, are used as a deterrent and are not supposed to inflict injury.

The two biggest parties in the Catalan parliament reached an agreement late on Wednesday to table a bill banning their use from May 2014.

"It has been decided to immediately begin withdrawing rubber balls from circulation and to replace them gradually so that by the end of April, a total ban is effective," reads the text of the bill proposed by the two parties, which have a majority in the Catalan regional parliament.

The Catalan government launched a review of the type of weapons used by the police during demonstrations after the woman, Ester Quintana, was injured during the protest last year.

Quintana urged the Catalan government to ban the use of rubber balls by police during an appearance before the Catalan parliament in July.

"I am not the first victim of rubber balls but I want to be the last. A society where people are afraid to demonstrate is not a free society," she said.

The move to ban Catalan police from using rubber balls comes as the force faces fresh allegations of brutality.

Eight Catalan police officers were indicted on Monday on suspicion of beating up a man while arresting him in Barcelona last month, causing his death.

Spanish media have broadcast video footage taken by area residents from their balconies showing policemen repeatedly kicking and punching the man as they pinned him down on the sidewalk.

Catalan police have said they were forced to pin the man down because he was agitated and had turned on them.