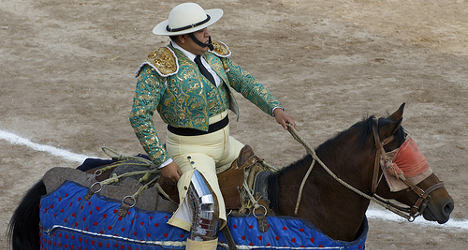 Spain's regions must now protect bullfighting and associated activities ranging from the breeding of bulls to the design of posters for bullfights. Photo: Mark Mitchell

The motion was passed despite only having the support of Spain's ruling conservative Popular Party (PP).

Coming in response to a petition signed by some 600,000 Spaniards, it means all of Spain's regions will now be obliged to "develop measures to promote and protect " bullfighting and associated activities ranging from the breeding of bulls to the design of posters for bullfights.

This includes Catalonia, where the past time was banned in 2011.

"The bulls will return to Catalonia," said the PP's Sebastián Ruiz Reyes during Wednesday's debate on the issue.

Jesús Iglesias with the left-wing IU party agreed. He said only Spain's regions had the power to decide if they wanted to "celebrate the festival of the bulls".

Meanwhile, animal rights groups were quick to slam the move by the Spanish Government.

"We are appalled that the Spanish Government has voted to protect a spectacle that causes unacceptable animal cruelty," said the coalition known as #LoveSpainHateBullfights.

"Spain is keen to promote itself as a modern country with a twenty-first century outlook, " the group said.

"Yet supporting the brutal torment and stabbing to death of animals for entertainment deeply tarnishes that image in the eyes of compassionate people in Spain and around the world."