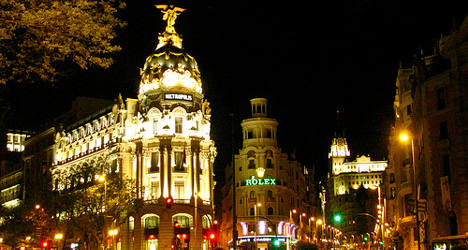 In a lengthy, scathing report, the article highlighted many of Madrid’s recent problems, including severe cutbacks in road and street maintenance, a drop in tourism revenue and a fixation on the failed 2020 Olympic Games bid by politicians.

The article sparked national discussion about the Spanish capital’s viability as a cultural hub.

But is there truth to these claims of Madrid as an unfriendly, dirty city?

American students from Syracuse University studying in Madrid do not seem to think so.

Amanda Winograd, a broadcast journalism student from New Jersey, was actually surprised by how clean Madrid was when she first arrived.

"I couldn't believe they clean the streets every night," Winograd says.

"People sit on the floors of trains and platforms [here] and perhaps that’s just a difference in culture, but it’s visibly cleaner than New York City," Chonzom says.

Ryan Lu of Virginia, who is studying international relations, goes as far as calling Madrid the cleanest city he has ever been to.

“They have a puritanical devotion to sanitation here and workers can be found washing the streets in the early morning. The metro is spotless,” Lu says.

"What's frightening is that apparently the city used to be even cleaner before the economic crisis forced cutbacks in their fanatical cleaning regimen."

Maya Johnson, a psychology student from New York City, does notice a few cleanliness problems in specific parts of Madrid.

"In the Sol area, there are so many people there at all times doing whatever," Johnson says.

However, she points out for a city, Madrid is relatively clean.

The students also find little truth to the claim that Madrid is unfriendly to tourists.

Chonzom says that Madrileños, as people from Madrid are known, are no different than the people from New York.

"I've met some friendly, genuine, and charming people in Madrid," Chonzom says. "And there are other days where I've encountered some aggressive, unfriendly, and disrespectful people either on the trains or while going out."

But the students are not oblivious to Spain’s suffering economy. In fact, they have seen many examples of how Spain has hurt from high unemployment and stagnation.

"When I walk down the street, I see a lot of closed storefronts," Winograd says. "Each one is a lost opportunity for jobs, which many Madrileños desperately need."

"Wherever you go there are buildings and spaces empty or for rent,” Lu says. “You will also see protests against the government and workers' strikes."

One particular problem they have seen is youth unemployment.

"I notice a lot of young people out in the streets at night and on the metro during the day, seemingly without anywhere to be or worrying about work the next morning," says Winograd .

But the Syracuse University students, who have traveled to different parts of Spain including the southern Andalusia and the coastal cities of Valencia and Barcelona, notice that Madrid does not seem to be as hard hit as some of the poorer regions of Spain.

They still see Madrid as a friendly, clean and welcoming city.

"Madrid seems like it has endless things to offer," Johnson says. "I am happy to be able to spend the most time here."

Although these students only have a month left here in Madrid, they have experienced the city as both tourists and residents.

"It is down to earth yet also a large and vibrant city," Lu says. "It is perfectly possible to enjoy the city fully both as a tourist and as a resident."