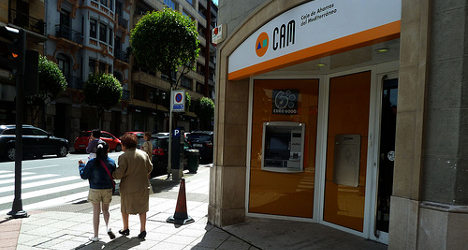 A judge ordered the five arrests and the searching of premises including lawyers' offices, a judicial source, who asked not to be named, told new agency AFP on Wednesday.

The first two suspects to be arrested, CAM's ex-general manager Roberto López Abad and Daniel Gil, one of its ex-directors, were due to be questioned by a judge on Thursday.

CAM, a regional savings bank and formerly Spain's 10th biggest bank, was taken over by Banco Sabadell as part of a shake-up to stabilize the financial sector which was hit hard by the collapse of a building boom in 2008.

Spain ended up receiving €41.3 billion ($56 billion) in emergency loans from the euro zone last year to save its banks from collapse.

The court also suspects that "the five suspects knew about, or should and could have but did not want to know about, the state of CAM's assets" before it collapsed, he wrote when he set bail for them in June.

"They at least made no objection to operations that would harm the assets and extremely weaken the entity they were working for, causing harm to shareholders, creditors, customers and depositors, and did so for their own benefit."

CAM was just one of many Spanish banks swamped in bad loans after a property bubble imploded in 2008 plunging the country into a double-dip recession.