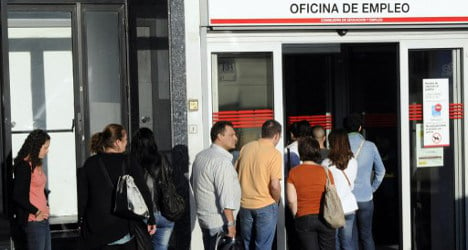 The October rise is also Spain's second monthly rise in a row after September saw 25,572 signing on for benefits. File photo: Dominique Faget

The number of people signing on at Spain's jobless offices jumped by 87,028 people in October, figures from a report by Spain's Employment Ministry  show.

This means there are now 4.811.383 people officially registered as unemployed in Spain.

The October rise is also Spain's second monthly rise in a row after September saw 25,572 signing on for benefits.

However, October's figures also mean that Spain has seen its first  year-on-year drop in unemployment since 2007, or before Spain's crisis.

Unemployment is now 0.46 percent lower than in October 2012, with 22,138 less people on the books than a year ago, according to the Employment Ministry.

Spain's official unemployment rate, calculated in a separate, broader household survey — the EPA — fell in the third quarter to 25.98 percent of the workforce from the previous quarter's 26.26 percent.

Prime Minister Mariano Rajoy's conservative government, which has passed reforms making it easier to change work conditions and cheaper to lay off employees, found some comfort in the latest jobs figures.

This year to date, the number of people who had registered as being unemployed fell by 37,340, the government said.

"We are convinced that the adopted reforms are the way to recovery and as such are necessary for our country to regain the path  of growth and the sustained creation of stable, quality employment," she said in a statement.

The Employment Ministry report shows the number of new contracts grew by 1,582,400 or 10.8 percent less than a year ago.

Spain is still struggling to overcome the aftermath of a decade-long property bubble that imploded in 2008, destroying millions of jobs and sending debt levels soaring.

Official data last week showed that Spain barely crawled out of a two-year recession by posting economic growth of just 0.1 percent in the third quarter of this year.

The International Monetary Fund has warned that Spain faces five more years with an unemployment rate topping 25 percent unless it enacts new reforms including measures to help firms slash wages instead of axing staff.