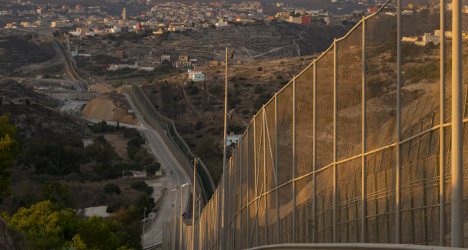 The Spanish city of Melilla, in northern Africa, is surrounded by an 11km (seven mile) fence designed to keep out illegal immigrants. Photo: Pierre-Philippe Marcou/AFP

Barbed wire started being placed on the top of several sections of the seven-metre (23-foot) high fence last week to "reinforce security a bit", a spokesman for government of Melilla said Monday.

Barbed wire had been used before in Melilla but was removed from the top of the border fence in 2006 after causing injuries to migrants as they tried to illegally enter the territory.

Forty-eight surveillance cameras already watch over the 11-kilometre (seven-mile) long fence which loops around the city until it reaches the Mediterranean coast.

At night the fence is lit up along its entire length to help spot migrants trying to enter the Spanish territory, which has 80,000 inhabitants.

The Spanish branch of Amnesty International said it was "deeply worried" over the installation of barbed wire on the border fence.

"The response of the Spanish government to the migratory pressure is moving away from the respect of the rights of people who try to enter our country and is a serious step backwards," it said in a statement.

The move comes in the wake of comments from Spanish Prime Minister Mariano Rajoy that the EU needed to do more to ensure an end to tragedies such as the October 3rd sinking of a boat off the coast of Italian island of Lampedusa in which 366 would-be immigrants died.

"Control of the European Union's external borders is an effort that must be shared by the whole union, member states and institutions," said Rajoy on the eve of a summit of European Union heads of state in late October.

About 3,000 migrants tried to scale the border fence between January 1st and September 17th, compared to 1,610 during the same period last year, according to Spanish interior ministry figures.

Nearly four-fifths, 77.3 percent, were prevented from entering the territory by Spanish and Moroccan security forces.

Melilla and Ceuta, another Spanish territory on the north African coast, have the European Union's only land borders with Africa.