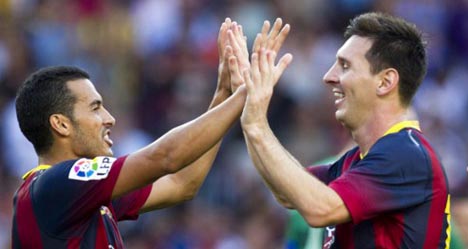 The four-time World Player of the Year (R) has endured a frustrating month on the domestic front. Photo: Quique García/AFP

The four-time World Player of the Year has endured a frustrating month on the domestic front.

Messi has failed to find the net in his last four La Liga games against Osasuna, Real Madrid, Celta Vigo and Espanyol since returning from a thigh injury, marking his longest goal drought for over two years.

However, in the Champions League, Messi has been his usual deadly self with four goals in two appearances so far this season and Pedro doesn't see any cause for concern.

"There is nothing wrong with him, he is training very well and very strongly," he said on Monday.

"His figures are spectacular and when he goes two games without scoring it seems like there is something up. He is always the one who makes the difference.

"Leo is always an ambitious player who wants to score a lot of goals. He looks fine to me, the goals will arrive and even more so if you are Leo Messi, the best player in the world.

"He is working hard and also assisting his teammates, which might go unnoticed. I think he is very calm because he knows the goals will come and everything will be fine."

Messi was the inspirational figure as Barca overturned a 2-0 first-leg deficit when the two sides met in the last-16 of the Champions League last season with a 4-0 thrashing of the Italians at the Camp Nou.

And he also netted in the 1-1 draw in the two sides first meeting in the group in Milan two weeks ago.

That point strengthened Barca's position as group leaders on seven points after three games and a win on Wednesday will guarantee their place in the last-16.

The only injury worries for Barca boss Gerardo Martino are in defence as Adriano and Gerard Pique both missed training on Monday.

With Jordi Alba also still out with a thigh problem, Martin Montoya may have to deputise again at left-back with Carles Puyol likely to return should Pique not be fit in time.

Barca's minor worries about Messi pale into insignificance compared to Milan's current troubles as they have made their worst start to a Serie A campaign since 1981-82.

Saturday's defeat to Fiorentina was already Milan's fifth of the season so far, leaving them a whopping 19 points behind leaders Roma after just 11 games.

There had been suggestions that coach Massimiliano Allegri could even be sacked should his side lose in the Catalan capital, but club vice-president Adriano Galliani has appealed for calm.

"At the moment the results are not coming, but in these times my experience teaches me that we need to stay calm," he told the club's website.

"There is absolute confidence in Allegri. Naturally, all coaches are dependent on results. If a coach constantly loses then obviously that isn't good enough, but I don't think that this will be the case for us."

The visitors will at least be able to call upon a fit Mario Balotelli. The Italian international could only feature as a late substitute in the draw with Barca in Milan and he is likely to be supported by the former Real Madrid duo of Robinho and Kaka.