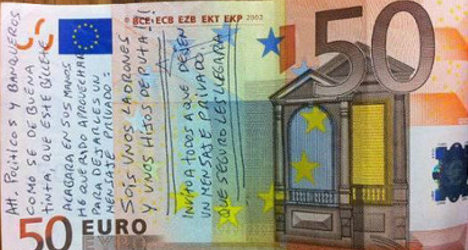 It's a quiet act of rebellion: as Spain's crisis crawls on into its sixth year, some Spaniards have taken to expressing their disaffection by writing messages on banknotes.

"This note has been laundered. Please don't circulate," someone has written on a €10 ($13.50) note, in a clear reference to the many corruption cases currently being tried in Spain.

As the authors of the blog Cosas de Dinero (Money Matters) explain, it's all a clear case of 'money talks'.

And as the blog also points out, no one is going to rip up these little messages because of the value of the paper they are written on.

Instead the notes pass from hand to hand, providing food for thought.

Click here to see the gallery of political message written by Spaniards on their banknotes.