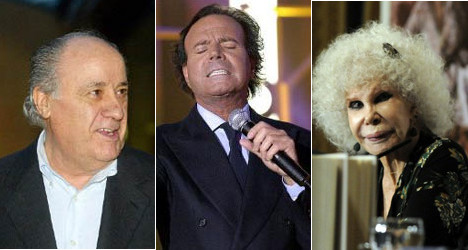 It may seem hard to believe that a Spaniard would give billionaires with the wealth of Mexico’s Carlos Slim and the US’s Bill Gates a run for their money, but Amancio Ortega’s story of wealth and power is truly awe-inspiring.

The camera-shy Galician, who opened his first Zara boutique in 1975, now has the wealth of the next twenty super-rich people on Forbes’ Spanish Rich List combined.

Next on the podium with €5.8 billion is Valencian businessman Juan Roig, CEO of the omnipresent supermarket chain Mercadona. The business was set up by his parents in 1977, but Roig has made the Mercadona brand a household name across the country and now employs 70,000 people directly.

The bronze goes to Ortega’s daughter Sandra Ortega Mera. After her mother’s death in August, she not only inherited €5.4 billion but was also proclaimed Spain’s wealthiest woman.

Just missing out on the medals are Madrid businessmen Rafael del Pino Senior and Junior. The father founded construction company Ferrovial in 1952 and the son now runs the business. Together the family assets are worth €5.3 billion.

Other Spanish billionaires who made the list include Mango founder and CEO Isak Andic (6th place with €3.8 billion), the unforgettable Duchess of Alba (eighth place with €3 billion in art and property) and Spanish crooner Julio Iglesias (46th place with a not-so-modest €850 million).

Spain’s royal family hasn't been included on the list, which Forbes says is because "King Juan Carlos’s wealth is still and will continue to be unknown despite the new transparency law".