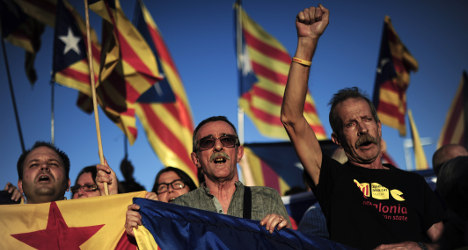 Demonstrators hold Catalan flags as part of a campaign for independence from Spain in Barcelona during the first Economic Forum of the Western Mediterranean on October 23th .File photo: Josep Lago/AFP

The independence debate in Catalonia is no longer simply about whether the region should or should't remain part of Spain, the poll published in Spain's El País newspaper shows.

Pollsters spoke to 1,000 people in the region in north-east Spain which has strong regional traditions, including a distinct language and culture, to hear their views on independence.

Catalonia has vowed on numerous occasions to press ahead with plans to hold a self-determination referendum.

But the government of Prime Minister Mariano Rajoy has insisted that a referendum in Catalonia — a wealthy region home to about 7.5 million of Spain's 47 million people — would be unconstitutional.

The new poll found that if people were offered a straight choice in a hypothetical vote between independence for Catalonia and remaining in Spain, 46 percent would vote to become a separate country.

That is marginally down from the 49 percent who would have done likewise in September.

But the poll also found that when people are offered a third choice in the form of a Catalonia within Spain with greater powers and autonomy, the number of pro-independence voters drops to less than one in three people.

Specifically, with three options on the table — independence, remaining within Spain and a region with greater powers — the number of people who would vote for independence is 31 percent while the number who would choose the status quo is 17 percent.

El País newspaper said the support for this third option was a reflection of the fact Catalans were "profoundly discontented" with both the anti-independence attitude of Spain's central government in Madrid  and the leadership of Catalan President Artur Mas.

The survey also shows 55 percent of people living in Catalonia think the region should be able to vote whether it can remain in Spain with input from the rest of the country.

Forty percent believe all Spaniards should vote on the issue.

The survey also found that only 33 percent of people in the region believe an independent Catalonia is likely, against 40 percent in September.

Another key finding was that 66 percent of people living in Catalonia do not believe Catalans are sufficiently informed about the consequences of independence.

Some 45 percent of people living in the region considered themselves Spanish and Catalan in equal measure, the poll found.

A total of 20 percent said they felt more Catalan than Spanish while 23 percent stated they were 'only Catalan'.

Only 6 percent of people said they felt 'only Spanish'.