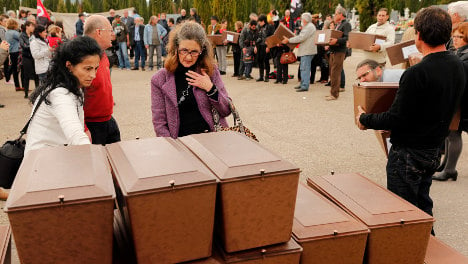 Urns containing the victims' remains were placed inside a tomb in northern Spain's Arando de Duero where a memorial has been erected in their honour.

Jose Maria Rojas, a spokesman for the Association for the Recovery of Historical Memory, told AFP the 129 people had been killed between July and October 1936 by Franco's forces.

"This ceremony is necessary so that the victims … can have a dignified burial like human beings, in a dignified place where loved ones can come and lay flowers," he added.

The bodies, which were found in four mass graves around Arando de Duero after a lengthy search, were "among 600 people killed in a 25-kilometre radius" around the town, said Maria Rojas.

During the past 13 years about 6,300 bodies have been exhumed from mass graves. Of them, 2,500 have been identified by volunteers and victims' associations with no involvement from the state.

Some 114,000 people disappeared during Spain's 1936-39 civil war and Franco's subsequent dictatorship, according the results of a 2008 investigation opened by crusading human rights judge Baltasar Garzon into Franco-era crimes.

The burial ceremony comes amid increased international pressure on Spain to investigate disappearances during Franco's dictatorship spanning 1939 to 1975, after the UN in October urged Madrid to overturn the 1977 amnesty.

Historians have estimated that about 500,000 people from both sides were killed in Spain's civil war, which was sparked by Franco's insurgency against the democratically elected left-wing Republican government.

While Franco's regime honoured its own dead, it left tens of thousands of its opponents buried in hundreds of unmarked graves across the country, according to victims' rights associations.