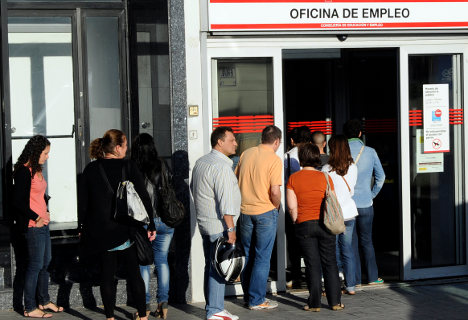 "Spain has improved its policy track record," said Fitch in a statement, adding that significant reforms made in the labour market, pension system and financial sector 'should put the economy on a surer footing."

The improved outlook, which reduces the immediate risk that Spain will lose its investment-grade rating, came days after the eurozone country confirmed it had crawled out of a two-year recession with 0.1 percent growth in the third quarter.

That growth was due in no small measure to improved export performance and Spanish firms having improved their competitiveness by trimming wages.

"Spain's balance-of-payments adjustment within the eurozone is proceeding at a faster pace than expected," said Fitch.

While this was due in part to recession-struck Spain importing less, the "improvement also reflects strong exports and competitiveness gains."

Despite Spain exiting recession sooner than it had expected, Fitch said it forecasts growth to remain weak next year at 0.5 percent.

The yield on Spanish 10-year bonds fell below 4.0 percent for the second time this year on Wednesday.

Fears over the banking sector, saddled with bad property loans, drove Spain's borrowing costs to the point the country nearly needed to seek a full bailout.

The country instead worked out an EU-funded rescue for its banks.

Fitch said "the banking sector restructuring has advanced well since 2012" and that "the risk of the system requiring state support of a similar magnitude over the medium term is low."