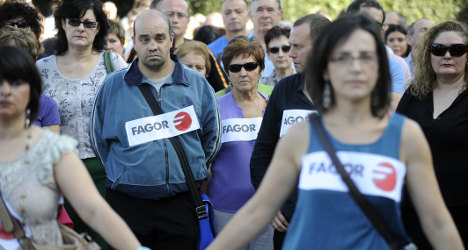 Fagor, the maker of appliances including washing machines and refrigerators, announced on October 16 that it had filed for protection from creditors while it tried to refinance its debt, estimated by the Spanish media at €800 million ($1.1 billion).

Under Spanish bankruptcy rules, the company, part of the sprawling Mondragon group created six decades ago in the northern Basque region, has four months to try to reach an agreement with its creditors.

But Mondragon said in a statement late on Wednesday that it felt Fagor, which has suffered a prolonged period of falling sales, "does not respond to the needs of the market and that the financial resources it is demanding would not guarantee its future".

Earlier on Wednesday Fagor, which says it is the fifth largest electrical appliance company in Europe, had warned that a lack of financing would push it to an "imminent bankruptcy demand".

Fagor posted sales of €1.17 billion in 2012, a drop of over one-third since 2007, a year before Spain's sharp economic downturn began due to the collapse of a decade-long property bubble.

Despite its international presence, Mondragon's cooperative structure has kept most of its jobs and production at home, with 35,000 employees in the Spanish Basque Country, 35,000 elsewhere in Spain and about 13,500 abroad.