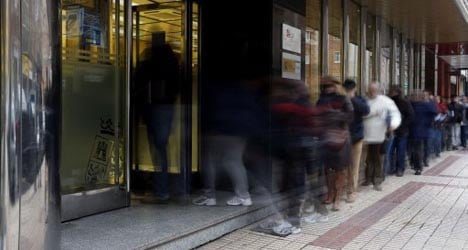 Strengthening exports drove the timid recovery in the eurozone's fourth-biggest economy despite weak internal demand, the National Statistics Institute said in a statement.

The growth figure meant a technical end to the recession as measured in terms of contraction in output.

But economists warn of continuing challenges to recovery and expect unemployment to remain painfully high after five years of crisis that have thrown millions out of work and driven up poverty.

The unemployment rate was 25.98 percent, a slight decline from the previous quarter but still one of the highest in the eurozone, according to separate INE data released last week.

It was Spain's second recession in five years, sparked by the collapse of a building boom in 2008 which last year made the country a focus of concern for the stability of the whole eurozone.

Wednesday's growth figures — preliminary data from the institute which are due to be confirmed on November 28 — confirmed last week's estimate from Spain's central bank.

"While economic prospects are considerably better than a year ago, particularly in the external sector, domestic weakness is like to hold back any recovery in the wider economy," said a report on Wednesday's data from analysis group Capital Economics.

"We expect the unemployment rate to remain around its current high levels for some time yet and public debt to continue to climb."

Consumer price inflation in Spain slowed in October to 0.1 percent compared to a year earlier, according to other preliminary data from the statistics institute, harmonised with EU estimates.

The institute attributed the easing in October to a fall in the price of food and a smaller rise in university fees than in the previous year.

Inflation has been easing in Spain since peaking in October 2012, in line with a general easing in the eurozone indicated by the European Union data agency Eurostat.

By another measure, the non-harmonised inflation figure that serves as a benchmark in Spain, inflation was negative for the first time for four years, at minus 0.1 percent.

Spain has pushed through painful spending cuts to bring down its soaring public deficit under pressure from the European Union.

It also last year passed labour reforms that have made it cheaper for companies to hire and fire workers.

Spain resisted pressure last year to seek a full bailout from its neighbours but accepted €41.3 billion ($56.8 billion) in eurozone rescue loans for its banks.