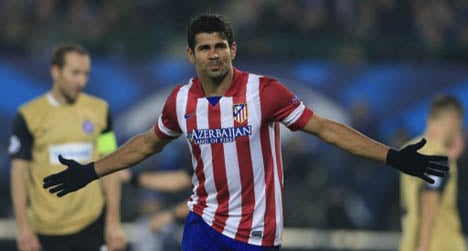 Costa made two appearances for Brazil this year but that does not prevent him switching allegiance because he hasn't played a competitive match at senior international level.Photo: Aexandre Klein/AFP

In a statement the RFEF said that the player has stated "his desire to be at the disposition of the Spanish national team manager Vicente del Bosque" in a signed letter addressed to Julio Cesar Avelleda, secretary general of the Brazilian Football Confederation.

"Therefore, Diego Costa can play with Spain in the upcoming games in November, if he is selected by the national team manager," the statement adds.

Spain are due to take on South Africa in a friendly in Johannesburg on November 19 and are in talks to arrange another friendly against Angola four days earlier.

Costa made two appearances for Brazil earlier this year in friendly matches against Italy and Russia, but that does not prevent him switching allegiance because he hasn't played a competitive match at senior international level.

The 25-year-old has scored 13 goals in as many games in all competitions this season and is currently the top scorer in La Liga with 11 goals from 10 matches, three more than Lionel Messi and Cristiano Ronaldo.

Del Bosque had announced his intention to call up Costa last month ahead of his side's final two World Cup qualifiers against Belarus and Georgia.

However, the paperwork needed to transfer Costa's allegiance from Brazil to Spain had not been completed in time for him to be involved in those matches.

Centre-forward has been a rare problem position for Spain over the past few years as Fernando Torres and David Villa have both struggled for form and fitness.

Del Bosque has often used midfielder Cesc Fabregas in a more advanced role in recent times and even handed a debut to Swansea City forward Michu in the 2-1 win over Belarus.