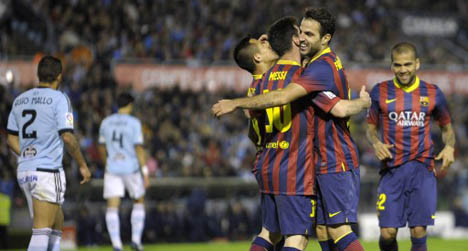 Alexis Sanchez continued his fine scoring form after netting the decisive goal in Barca's 2-1 win over Real Madrid at the weekend when he tapped home the opener after just nine minutes.

Celta had their chances to equalise towards the end of the first period, but went two behind at the beginning of the second when Cesc Fabregas' drive rebounded into his own net off goalkeeper Yoel Rodriguez and Fabregas added a third with a clinical finish soon after.

"There are games where we have lacked a little punch up front, like against Osasuna when we didn't take advantage of our chances," Fabregas told Canal Plus.

"This time they have gone in. The important thing is to continue creating chances and play well and the goals will arrive."

With Barca in the midst of seven games in 22 days, coach Gerardo Martino made five changes from the side that started the match against Madrid on Saturday.

Javier Mascherano, Xavi, Andres Iniesta and Neymar all dropped to the bench, whilst Gerard Pique was left out of the squad due to an ongoing hamstring problem.

And Martino was happy with the control displayed by his side in the second-half after a slightly shaky spell towards half-time.

"I thought we won quite comfortably, we just had one period before half-time where we let Celta get in behind our midfield more easily.

"We started well and our idea to play Cesc closer to Messi to pressure their defence worked.

"In the second-half we managed the game far easier because Cesc made it a margin of three goals in a matter of minutes."

Carles Puyol, Marc Bartra, Alex Song, Pedro and Sanchez returned to the starting line up and it was the Chilean who notched his sixth goal of the season after just nine minutes.

Fabregas was played through on goal by Pedro and after his shot had been beaten away by Yoel, Sanchez had the simple task of tapping home the rebound.

But Celta improved mightily as the half wore on and Barca were again indebted to goalkeeper Victor Valdes for keeping them in front at the break.

On-loan midfielder Rafinha Alcantara was inches away from equalising against his parent club on 28 minutes with a driven effort that flew just wide.

Valdes was then forced to block another fiercely struck effort from Rafinha barely a minute later and Celta were right to complain when they then had a goal ruled out for a very soft foul on the keeper after he flapped at a cross from the right.

However, Barca put the result beyond any doubt just three minutes after the restart when Fabregas' wonderful effort from 25 yards struck the bar and rebounded into the net off the unfortunate Yoel in the Celta goal.

Six minutes later it was 3-0 as Messi again fed Fabregas and this time he made sure it was his name on the scoresheet as he drilled the ball low past Yoel at his near post.

The only negative note of the evening for Barca was a third consecutive league game without a goal for Messi.

However, it wasn't for the want of trying on the Argentine's part as he forced Yoel into a series of fine saves to keep the score down in the final stages.