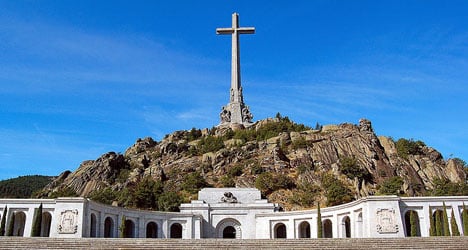 To many Spaniards, the Valley of the Fallen is seen more as the site of Franco's tomb rather than a neutral grieving ground for Spain's 500,000 Civil War victims. Photo: Neticola/Flickr

Spain's socialist party presented a private member's bill in Parliament on Tuesday in which they called for the body of Franco, who ruled from the end of Spain's Civil War in 1939 until his death in 1975, be exhumed.

They demanded his remains be "transferred from the Valley of the Fallen to a place his family decides on or one that is more suitable".

With the move, the party headed by Alfredo Pérez Rubalcaba is hoping to "transform the symbolic nature of the Valley of the Fallen", a Catholic basilica and monumental memorial conceived by Franco himself to honour those killed during the Spanish Civil War.

The PSOE are also demanding that the body of Antonio Primo de Rivera, founder of Spain’s fascist-inspired Falange party, be dug up and moved to "somewhere where his remains don’t stand out over those of the other victims".

The draft bill also points out that during the construction of the Valley of the Fallen, which began in 1940 and took 19 years to complete, Republican political prisoners were used as slave labour.

To many Spaniards, the Valley of the Fallen, just outside Madrid, is seen more as the site of Franco’s tomb rather than a neutral place of mourning for the 500,000 people widely believed to have died during Spain’s Civil War from 1936 to 1939.

Spain's two main parties, the right-leaning Popular Party and the PSOE socialists, are the heirs of the representatives of both sides of Spain’s Civil War.

Socialists have a close connexion with the Republican cause whereas the Popular Party had its origins in Alianza Popular, which was formed largely of ministers of Franco's government.

The US's Times magazine once quoted Jaume Bosch, a Spanish Jewish far-left politician and former MP, as saying “I want what was in reality something like a Nazi concentration camp to stop being a nostalgic place of pilgrimage for Francoists”.