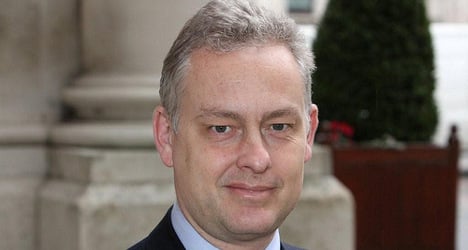 Simon Manley CMG, a member of the UK’s Diplomatic Service since 1990, has taken over from Giles Paxman as Her Majesty’s Ambassador to Spain and non-resident Ambassador to Andorra.

In a statement, Manley — who has spent the last few months polishing up his Spanish — said he was "delighted to be here in Spain" and looked forward to "strengthening our broad and deep bilateral relationship" between the two countries

"Spain is a key ally within the European Union and NATO and is one of our most important trading partners," the diplomat said.

"Creating sustainable growth is a priority for both the UK and Spain."

Manley pointed out that Spain was the UK's sixth largest investor having poured £40 billion (€46 million, $64 million) into the country up to the end of 2011.

Manley, married to a Spaniard, also said he was looking forward to meeting and working with companies in both Spain and the UK keen to secure a foothold in their respective markets.

"I am excited by the prospects for cooperation and growth in sectors like energy, car manufacturing and life sciences that are so important for future growth."

The new ambassador also said "liberalizing trade both within the European Union" was key in terms of creating jobs and growth.

"As two open economies with strong Atlantic ties, the UK and Spain share a common commitment to secure an ambitious trade agreement between the EU and the US and to ensure that the EU is at the forefront of moves to free up world trade."

Manley also highlighted the importance of British citizens in Spain, citing the 13 million British visitors to the country ever year and the 800,000 Brits who live permanently or for part of the year in Spain.

"The UK remains the largest foreign investor in Spain’s property market. I’m impressed by how the British Consulates across Spain work with Spanish partners to do an excellent job of assisting British nationals."

Before his posting to Madrid, Simon Manley was Director Europe at the Foreign & Commonwealth Office (FCO) from 2011 to 2013, where he was responsible for policy towards the EU, the UK’s bilateral relations with its European partners, and the FCO’s network of 57 European posts and more than 2000 staff.

He served previously as the FCO’s Director Defence and Strategic Threats (2008–2011), leading the Government’s international counter-terrorist, counter-proliferation and counter-narcotics efforts, as head of Counter-Terrorism Policy (2006-2008) and as head of the EU Economic, Central Europe and Ireland department (2002-2006).

He has been posted to the UK’s Mission to the United Nations in New York (1993–1998), where he worked on Yugoslavia and UN reform, and has twice been seconded to the European Union: to the European Commission (2003), working on State Aids policy, and to the Council of the EU (1998–2002), working on Russia and Ukraine and then East Asia.

Manley was made a Companion of the Order of St Michael and St George (CMG) in Her Majesty The Queen’s Birthday Honours in 2009 and a Commander of the Polish Order of Merit in 2004.

He is married to Maria Isabel Fernandez Utges Manley, an intellectual property, competition and regulatory lawyer. They have three daughters aged 13, 12 and 5.