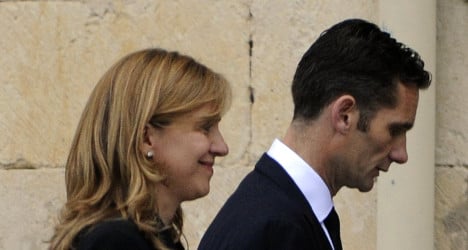 A lawyer for Princess Cristina, the youngest daughter of Spain's King Juan Carlos, said on Tuesday there was a "possibility" she would face questioning in court after Spain's El Mundo newspaper on Monday published details of the contract.

The newspaper printed part of a rental contract showing that Princess Cristina signed as both the owner and the tenant in an office rental 'agreement' worth €12,000 a year.

By signing that contract, Cristina and her husband managed to artificially reduce the earnings of Aizoon  — a company they jointly owned — thus bringing down tax bills, the paper claimed.

El Mundo also alleged the false contract allowed the couple to divert public money from Aizoon which, in turn, had been embezzled from the sports charity the Noós Institute.

Spanish authorities have been investigating the financial dealings of the princess and her husband Iñaki Urdangarin in the wake of allegations Urdangarin and his business partner Diego Torres diverted funds from the Noós Institute.

The courts decided Cristina would not have to face embezzlement charges in that matter because of a lack of evidence.

But Judge José Castro then announced an investigation into possible tax fraud by the princess via Aizoon.

The latest revelations about the rental contract follow on from other recent allegations that the pair racked up a bill of nearly €150,000 ($207,000) on furniture and curtains to redecorate their Barcelona villa — money also allegedly taken from the public purse.