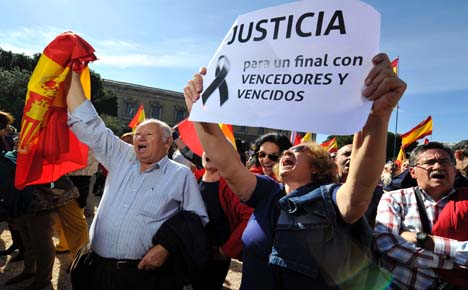 People brandish Spanish flags and a poster reading "Justice, for a end with winners and losers" as they gather with thousands of Spaniards at Plaza de Colon. AFP Photo/ Gerard Julien

Many of the demonstrators turned up in downtown Madrid, carrying the red and gold Spanish flag as a symbol of the country's unity, and enthusiastically applauded as the national anthem played.

"Criminals must pay," said Maria Luisa Guisado, 71, who was at the protest with her husband and another retired couple.

"We are not victims, thank God, but we came in support of the victims. Let's hope this would help."

Del Rio Prada had served 26 years of a 3,828-year sentence for terrorist-related offences including 19 killings in attacks such as a 1986 Madrid car bombing that killed 12 police.

About 50 other Eta convicts are demanding their release.

Prime Minister Mariano Rajoy has called the European ruling unjust, and his party has joined in the call for protests.

But some victims feel that the government has not done enough on the issue and that the Spanish courts should not bend to the European court's decision.

"Rajoy, you have betrayed Spain. You're trampling on the victims," read one poster.

Eta, listed as a terrorist group in the United States and Europe, is blamed for the deaths of 829 people in a four-decade campaign of shootings and bombings for an independent homeland in northern Spain and southern France.

In October 2011, the group declared a "definitive end to armed activity" but it has not formally disarmed nor disbanded as the Spanish and French governments demand.

The Spanish government refuses to negotiate with Eta, which has in any case been severely weakened in recent years by the arrests of its senior leaders in Spain and France.