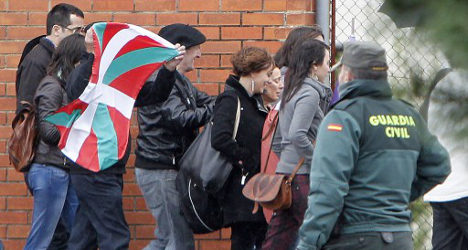 A total 36 ETA prisoners, some sentenced to hundreds of years for their part in a bloody campaign of bombings and shootings, had lodged appeals seeking their release with the Spanish courts, the source said.

The prisoners applied to be set free after the Strasbourg-based European Court of Human Rights condemned Spain on Monday for retroactively cutting the years of remission earned for prison work by 55-year-old ETA prisoner Inés del Río Prada.

The European ruling could end up freeing 54 ETA prisoners, nine prisoners from other armed groups, and 14 common criminals, all of whom had their remission time shortened retroactively.

Del Río walked free from her prison in A Coruna, northwestern Spain, on Tuesday, a day after the European court's finding.

She had served 26 years of a 3,838-year sentence for terrorist-related offences including 19 killings in attacks such as a 1986 Madrid car bombing that killed 12 Guardia Civil police.

The human rights court found against Spain over its retroactive use of a legal doctrine that wiped out the time ETA and other convicts had earned from prison work.

The doctrine, adopted by the Spanish Supreme Court in 2006, said that years of remission earned through prison work should be deducted from the total sentence — often amounting to hundreds or even thousands of years — instead of the 30-year limit on prison terms set by Spanish law.

In Del Río's case, the doctrine wiped out her remission and extended her prison time by nearly nine years.

The practice was known as the Parot doctrine because it was first applied in February 2006 to ETA prisoner Henri Parot.

The Strasbourg court's rejection of the doctrine was welcomed by the pro-Basque independence party Sortu.

"We cannot hide our joy because we are happy but we do not want our joy, nor our position, to hurt anyone, including the victims," Sortu president Hasier Arraiz told Basque public radio, stressing that no formal celebrations were being organised for Eta prisoners who may be freed.

Eta, listed as a terrorist group in the United States and Europe, is blamed for the deaths of 829 people in a four-decade campaign of shootings and bombings for an independent homeland in northern Spain and southern France.

Prime Minister Mariano Rajoy met later Wednesday with representatives of the victims of Eta's violence, who had urged Spain to refuse to bow to the Strasbourg court and lamented the prospective release of Eta convicts.

"We think that justice has not been rendered. We feel very wounded, very angry," said Angeles Pedraza, the head of the victims' group, after the meeting. The group has called for a rally in Madrid on Sunday.

The Spanish government refuses to negotiate with ETA, which has in any case been severely weakened in recent years by the arrests of its senior leaders in Spain and France.