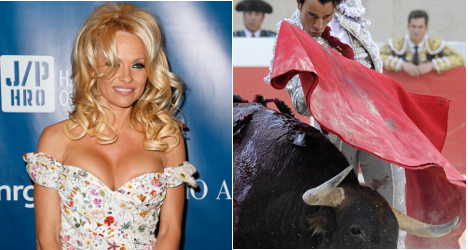 "Tormenting bulls for entertainment belongs to the Dark Ages, not the 21st century," the Canadian–American celebrity wrote in a letter to Spain's politicians.

"Spain is a modern country with a wealth of treasures" including "art, architecture, and music", culture buff Anderson raved in the letter dated Wednesday.

"But in 2013, in an otherwise civilized society, seeking to continue the gratuitous slaughter of sentient animals is perverse.

"There is nothing remotely entertaining about stabbing bulls to death in bullfighting arenas," she added.

The message from the famously busty actress arrived in the postbox of the Spanish Parliament on the same day animal welfare organizations met with the country's politicians to try and persuade them not to sign off on legislation that could see bullfighting protected as 'cultural heritage' in Spain.

Recently, the Spanish Parliament's culture commission voted in favour of the motion pushed through by the country's ruling conservative Popular Party.

The country's politicians are now expected to vote on the initiative in November.

If the legislation is passed, the government will be able to use public money to subsidize a past time known in Spain as 'la lidia'.

But animal rights activists are strongly opposed to a move they see as propping up a cruel activity with falling popularity.

"Compassionate Spanish citizens do not support the cruel spectacle of bullfighting and don't want public funds used to help this dying industry," said Marta Esteban Miñano, of the group La Tortura No Es Cultura in a statement.

The same poll of just over 1,000 Spaniards showed 76 percent of people in the country did not think public funds should be used to support the activity.

Bullfighting is already banned in the two Spanish regions of Catalonia and the Canary Islands.