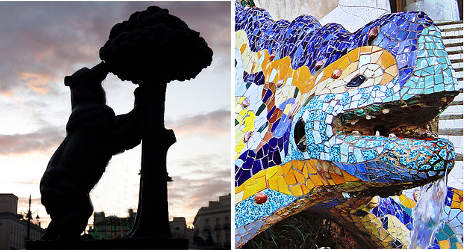 On October 26th, Real Madrid and Barcelona will face off in the football match that stops the nation, and much of the planet too.

Bars, living rooms and terraces around the country will be packed as Spaniards watch the game known popularly as El Clásico.

Go straight to the gallery and find out which city won the great Madrid versus Barcelona face-off.

It's a match with a long history, and has a resonance that goes far beyond the football field.

Then there are the deeper historical roots with Real Madrid linked in the Spanish imagination to the right-wing dictatorship of Francisco Franco while Barcelona was the city of the Republicans who lost the country's bitter Civil War.

Games between the two great clubs are always intense but this time there's extra spice.

Madrid has just lost its bid to host the 2020 Olympic Games and is a city on decline, if the Spanish press is to believed.

Barcelona, meanwhile, is on the ascendant. It is now officially the most popular city destination for tourists to Spain, and is attracting money from the likes of Bill Gates.

And in September, millions of Catalans came out onto the street to demonstrate in favour of an independent state.

With all of these developments, The Local decided it was time to weigh up the merits of the two cities and see which came out top.

We looked at everything from weather to culture and food to pick our winner.

To find out which city is best read on.