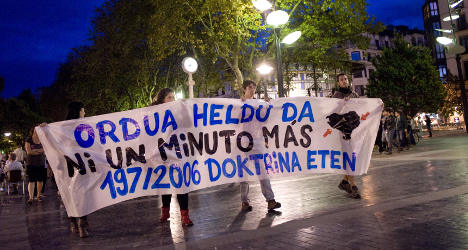 The Strasbourg-based European Court of Human Rights ruled Monday that Inés del Río Prada be released, condemning Spain for retroactively cutting short the years of remission she had earned from prison work.

Judges in Spain's National Court ordered that she be let go "in line with the Strasbourg decision," a judicial source said.

The European ruling could lead to the freeing of 54 ETA prisoners, nine prisoners from other armed groups that have since been broken up, and 14 common criminals, all of whom had their remission time shortened retroactively.

Del Río has been in jail since 1987 after being sentenced to 3,838 years for terrorist-related offences including 19 killings. She was expected to be released from a prison in A Coruna, northwestern Spain, at some time on Tuesday.

The human rights court ruled against Spain over its retroactive use of a legal practice known as the "Parot doctrine" that allowed the time convicts spend in prison to be extended.

The doctrine, adopted by the Spanish Supreme Court in 2006, said that years of remission earned through prison work should be deducted from the total sentence — often amounting to hundreds of years — instead of the 30-year limit on prison terms set by Spanish law.

In Del Río's case, the doctrine wiped out her remission and extended her prison time by nearly nine years.

It was first applied in February 2006 to ETA prisoner Henri Parot.

Spain's Justice Minister Alberto Ruiz-Gallardon spoke of his "regret" after the European ruling but said it would be up to the courts to decide on how the verdict applied to other cases.

Victims of ETA's violence had urged Spain to refuse to bow to the Strasbourg court.