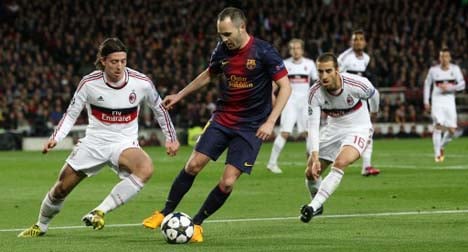 Barcelona are making their fourth visit to the San Siro in as many seasons. Photo: Quique García/AFP

Only a "perfect" AC Milan will allow the depleted Serie A giants to emerge with an "important" result from their Champions League Group H clash with Barcelona, says coach Massimiliano Allegri.

The Catalan giants are making their fourth visit to the San Siro in as many seasons, having accounted for the Italians in the group stages in 2011, in the quarter-finals in 2012 and in last season's last 16 knockout phase.

Despite being held to a scoreless draw by Osasuna on Saturday, when ailing Lionel Messi was restricted to a cameo appearance late on, Barça coach Gerardo Martino insists his side already have a place in the last 16 knockout phase in their sights.

"It's a crucial game for us in terms of qualification from the group. If we win, we will be more or less qualified," Martino told reporters at the San Siro on Monday.

Martino, whose side face bitter rivals Real Madrid in 'El Clasico' next weekend, played down the result of last weekend's La Liga encounter.

"We didn't get a great result but we still played well. Sometimes it's just as important to see a solid performance from your team as it is to get the result," he added.

"It's an important week for us – we're meeting two sides that have a big tradition in Europe – but it's only the start of the season and we'll have many other big games ahead."

Barcelona won the last of their four Champions League titles in 2011, but reached the semi-finals in both 2012 and 2013 when eventual winners Chelsea and Bayern Munich respectively ended the Spaniards' dreams of making the final.

Against Milan, Barcelona have enjoyed the upper hand in recent seasons. A third win in the group would put them on nine points, five ahead of Milan at the halfway stage.

Martino's men succumbed to a 2-0 defeat at the San Siro last season but turned on the style at the Nou Camp where a first-half brace from Messi helped settle nerves before an eventual 4-0 romp.

Messi, returning from a thigh strain last weekend, played only the last 22 minutes against Osasuna but Martino hinted the Argentinian could be primed to start.

"The doctors have cleared him to play and as soon as they say that, then he is available," said Martino. "It would have been a risk to play him from the start in Pampluna, but having seen him I think he will be ready."

Injury-hit Milan, meanwhile, have been given a boost with the news that striker Mario Balotelli, who won and scored a penalty to level late for Milan in a 1-1 draw ta Ajax last time out, has been named to Milan's squad.

The 23-year-old had been expected to sit out as he recovers from a thigh problem but could now start on the bench.

Martino admitted the striker, if he plays, could make the difference: "As a coach I'd prefer for him not to play, but as a fan it's different."