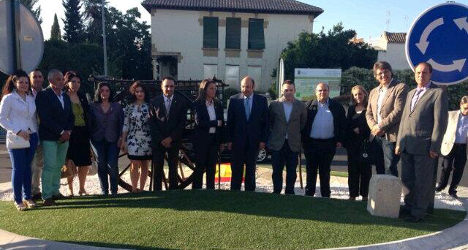 For many Spaniards, the image of the unveiling of the roundabout in Alhendín signifies the desperate need Spanish politicians appear to have to be seen unveiling projects. Photo: Twitter

It's a photograph that has captured Spain's attention in recent days: 14 Spanish politicians lined up across a small roundabout in the small town of Alhendín on the outskirts of the southern city of Grandada.

Indeed, the image shows there is barely space to move for the local politicians — most from the ruling local conservative Popular Party (PP) — as they grin and have their picture taken.

For many, the photograph from October 11th signifies the overblown pomp of Spanish political life as well as the desperate need Spanish politicians have to be seen while unveiling projects.

It also shows how much Spain has downsized its expectations since the country's crisis kicked in five years ago.

"Inaugurating these roundabouts is the only way politicians have left to unveil something," said Ideal newspaper blogger Quico Chorino in a recent tongue-in-cheek piece that first brought the picture to Spain's attention.

"In times of bonanza, a lot of money was wasted on pavilions, and covered pools and they even wasted money on the odd library," wrote the blogger.

But what "we could done is changed all of these boring intersections into roundabouts".

Chorino then dismissed the glories of the UNESCO World Heritage Alhambra Palace and said these roundabouts were the way of the future.

"I can see the publicity already: Visit our roundabout, the only one in the world which is 14 politicians in diameter."

The unveiling of the roundabout has once again highlighted the lack of imagination of Spain's politicians, according to the country's El País newspaper.

But politicians "have to learn to do things differently," he stressed.

We need politicians "with imaginations" who do their homework, said the expert.