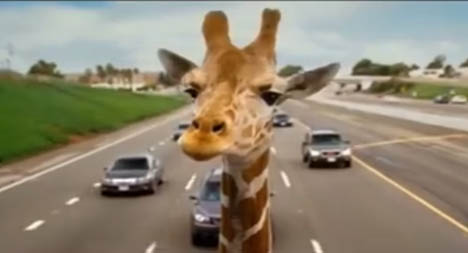 Veterinarians put the giraffe down after a horrific accident that brought to mind a scene from the Hollywood movie Hangover 3. Screen grab: YouTube

The giraffe, named Jerezana, was on its way from the southern city of Jerez to Bioparc de Valencia when a truck crashed into the convoy carrying the animal at 12:30am.

The collision gravely injured Jerezana, according to a veterinarian traveling with the convoy. Jerezana received immediate medical attention.

Experts on the scene conducted an operation using a crane to lift the trailer. They resumed the trip and arrived at the Bioparc de Valencia at around 8am, where a team of vets was waiting for Jerezana.

When Jerezana arrived at the zoo, the team decided to put the animal to sleep. She was suffering from fractures to her jaws and a loss in bone tissue, injuries that hampered her ability to eat.

Veterinarians thought it would be impossible for Jerezana to recover.

Jerezana was born in the Zoobotánico de Jerez on May 2nd, 2011.

She was supposed to be incorporated into a group with her sister Buleria in Bioparc, where she would have mated with a male giraffe. Jerezana was a baringo giraffe, also known as Rothschild’s giraffe, an endangered subspecies from Uganda.