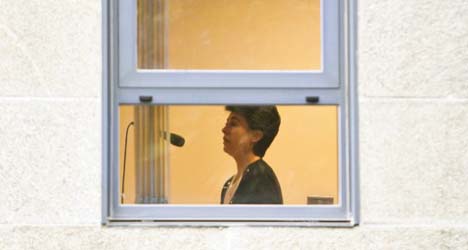 Rosario Porto, a 44-year-old lawyer, and her ex-husband, 49-year-old journalist Alfonso Basterra, were charged last month with "homicide, possible murder" and imprisoned without bail while awaiting the results of toxicological tests on their daughter's body.

But after questioning the two suspects again on Friday, the judge leading the investigation raised the charges against them to murder because of "the aggravating circumstances of treachery and kinship", the High Court of Galicia said in a written statement.

Homicide is the legal term for killing without premeditation while murder charges apply in the case of a planned homicide.

The body of the girl, Asunta Yong Fang Basterra Porto, was discovered in the early hours of September 22nd in woodlands near Santiago de Compostela in the northwestern region of Galicia, just hours after her parents had reported her missing.

Police on Friday searched for the second time a rural home in the area belonging to Rosario Porto's recently deceased parents. Porto and her former husband, their lawyers, and the investigating judge were at the house during the search.

The girl's body was found about five kilometres (three miles) from the house.

Porto, a Spanish citizen who acted as French honorary consul in Galicia from 1996–2006, and Basterra both denied having killed their adopted daughter during their appearance in court last month.

Newspapers and television talk shows have devoted intense coverage to each twist and turn of the case against the parents, who reportedly adopted their daughter in China when she was a baby.

China's foreign minister was "highly concerned about the case", ministry spokesman Hong Lei said at a briefing in Beijing on September 27th.

"Upon learning (about) the case, our embassy immediately got in touch with the Spanish police, requiring the Spanish side to launch an investigation at once," a transcript posted on the Chinese foreign ministry's website read.

It further called on Spanish authorities to "hold the perpetrators to justice and take concrete measures to ensure the safety as well as the legitimate rights and interests of adopted Chinese children".