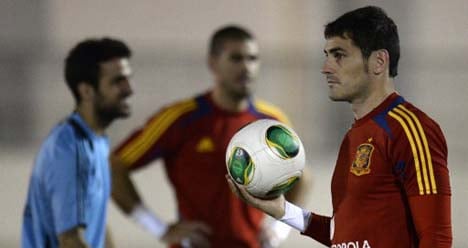 Should I stay or should I go? Rumour has it Barcelona would be interested in signing Iker Casillas if he did finally decide to leave Real. Photo: Lluis Gené/AFP

The 32-year-old is a one-club man having grown up through the youth ranks at Madrid before making his debut in September 1999 as an 18-year-old.

Apart from a brief spell in 2001/02 when he lost his place in the side, Casillas has been an immovable object in the Madrid goal ever since.

That was until last season when then-coach Jose Mourinho dropped him in favour of Diego Lopez, a move replicated by new boss Carlo Ancelotti.

The lack of match-action has seen Casillas also lose his guaranteed starting spot in the Spain side, something that had not happened since he made the jersey his own at the 2002 World Cup in Japan and South Korea.

Casillas has vowed to fight on for now, but said he cannot be certain that will last much longer.

"Right now my aim is to fight, battle and play every day," he said during an event for children at the Boadilla del Monte sports club near Madrid.

"If it wasn't clear, I would have told the president that I wanted to leave in September (before the transfer window closed), that my only desire was to leave here, or at Christmas.

"However, if the situation doesn't change in the next three months, at best I'll be considering to leave."

Spain coach Vicente del Bosque had stuck with Casillas last season and at the beginning of this campaign despite his lack of game-time, but that all changed against Belarus last Friday when Barcelona's Victor Valdés was given the nod, although Casillas reclaimed his place against Georgia on Tuesday.

Apart from his Spain games, the only action Casillas has seen this season is in the Champions League, where Ancelotti has curiously decided to keep faith with him.

However, with a World Cup coming up at the end of the season in Brazil, Casillas will be eager to play first team football on a more regular basis, or risk being confined to the bench for the biggest tournament of them all.