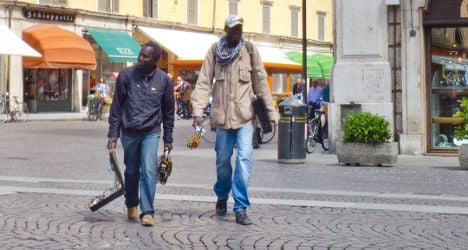 Spain's gitanos, or gypsies, are up to ten times more likely to be stopped on the street by police than 'white' Spanish people, the study shows.

For people from the Maghreb — which includes Spain's many Moroccans — this rate is 7.5 times higher.

Black Africans, meanwhile, are up to 17 times more likely to be the subject of a police identity check on the street.

These are the findings of a new study carried out by Spain's Valencia University with assistance from Oxford University in the UK.

In 2012, 7,900,000 such checks were carried out according to Spain's Interior Ministry, but police do not release details on the race of people stopped.

A total of 16 percent of Spanish-born ethnic minorities had been stopped in the last 12 months against 5 percent for the ethnic majority Caucasian population.

For people from these groups not born in Spain the rate was much higher: 36 percent of people born outside the country said police had stopped them.

"I very much welcome the survey findings as it validates what myself and others have reported," said Mohamed Gerehou, a Spanish born citizen of Gambian background who has experienced repeated police stops on the release of the report.

"This is not just a statistical fact, but it is about people's lives.

"As a Spanish citizen born and raised in Spain, ethnic profiling is especially damaging as I am made to feel a second-class citizen and told that I don’t belong here."

Critically, the Valencia University study also finds no link between the number of identity checks of Spain's ethnic minorities and an increase in terms of arrests or fines.

The study's authors also argue that the over representation of these groups in Spain's prisons is a product of racial profiling.

The study — based on phone surveys with 2,800 people across Spain — comes in the wake of other negative reports on Spain's human rights record.

In 2011, the United Nations Committee on the Elimination of Racial Discrimination cited worrying levels of racial profiling in Spain.

Also in 2011, the European Commission against Racism and Intolerance urged Spain to stop racial profiling.

Spain's Interior Ministry issued a Circular in 2012 calling for an end to the practice, the reports by these oversight bodies, as well as from domestic and international human rights NGOs have demonstrated that the practice has continued.

José García Añón, of the Human Rights Institute of the University of Valencia said: "This study is the first of its kind to offer empirical evidence that proves the ongoing use of ethnic profiling by Spanish police and the consequences it generates.

"While such statistical evidence is a critical step in documenting and addressing the problem, the next step necessary is to create solutions to eradicate it, avoiding these acts of discrimination."