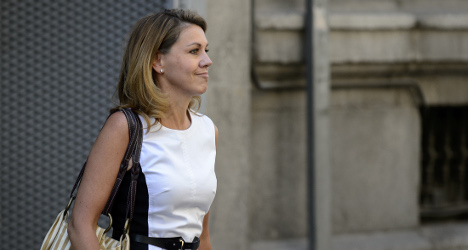 Luis Bárcenas told the court he made the two payments directly to María Dolores de Cospedal in 2008.

During the hearing, he said such payments were "tradition" within the PP at the time, and they were made with €500 bills.

The ex-treasurer's accusations are part of a long-running  scandal involving alleged kickbacks involving members of the PP.

Rajoy has denied that he or other party figures received illegal payments and has said he will not step down over the affair but admitted when he was grilled in parliament over the affair that he had been wrong to trust Bárcenas.

In testimony in July, Bárcenas named Rajoy and Cospedal among Popular Party officials who benefited from the party slush fund.

But on Friday Cospedal said that she had "never received payments" — listening with a "bitter smile" to the former officials allegations according to Spain's El País newspaper.

"I don't know if others received these bonuses," she said, denying that entries in the Bárcenas ledgers related to her.