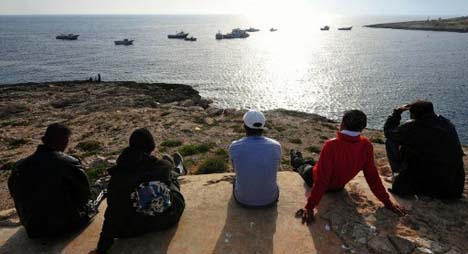 In 2012, a total of 89 people from several sub-Saharan countries had set up camp on Isla de Tierra, some 120 kilometres east of the Spanish enclave of Melilla. File Photo: Alberto Pizzoli/AFP

Emmanuelle Mahop and Denis Hiondi, from Cameroon, were kicked out of the previously uninhabited Spanish-owned island of Tierra in September 2012 along with 71 other undocumented sub-Saharan Africans.

Spanish authorities handed them over to Morocco, a move Mahop and Hiondi claim is “strictly prohibited by the European Human Rights Act” if in the country in question “human rights are systematically violated”.

Moroccan authorities sent the sub-Saharan immigrants to the Algerian border and left them to fend for themselves.

By taking the case to court, Mahop and Hiondi also hope to stop future expulsions from taking place in Spain.

At the time of the incident, a total of 89 people from several sub-Saharan countries had set up camp on Isla de Tierra, some 120 kilometres east of the Spanish enclave of Melilla. The tiny Spanish islet of Tierra is only 100 metres off the coast of Morocco. Photo: Abdelhak Senna/AFP

Spain’s Guardia Civil police took the mothers and children to receive medical attention in Melilla but then breached Spain’s Immigration Act by not judging the case of the 73 other immigrants individually, lawyers say.

Despite rightfully claiming they were on Spanish soil and should therefore be taken to mainland Spain for their cases to be evaluated, all 73 were handed over to Morocco the following day.

None of them were offered lawyers or interpreters.

Spain’s Interior Ministry relied instead on an already existing bilateral agreement with Morocco which allows for immigrants arriving in Spain directly from Morocco to be returned to the north African country.

Their argument, according to Spanish daily El País, was that the only way the immigrants could have made it on to the Isla de Tierra was by crossing the short stretch of water separating it from the Moroccan coast.

A Spanish Interior Ministry spokesperson told El País the 2012 expulsion has been legal and declined to comment further.

The daily reported that the “Spanish Rock” also represented a headache for the Spanish government because it constituted another gateway into Europe for sub-Saharan Africans who were finding it increasingly hard to enter Spain through the Strait of Gibraltar.

A total of 3,804 would-be immigrants reached the Spanish coast last year, according to figures from Spain's interior ministry.
Thousands of migrants fleeing poverty and unrest in Africa try to enter Europe each year, by land into Ceuta and Melilla and by sea to Spain or Italy, often in flimsy vessels.