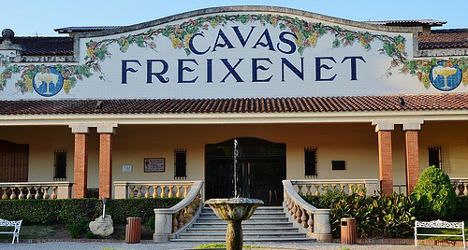 Cava is big business in Catalonia and exports of the bubbly — Spain's equivalent to French champagne or Italy's prosecco — have climbed by around 50 percent in the last decade to around 161 million bottles a year, according to the New York Times.

It's a flagship industry for the region, but as cava maker Toni de la Rosa Torelló told the influential newspaper: "Making the most representative product of Catalonia does not mean we want to be represented in this political debate."

On Catalonia's national day, on September 11th, a pro-independence human chain stretched hundreds of kilometres (miles) and joined hundreds of thousands of people.

Catalonia, proud of its unique history, languages and traditions has vowed to press ahead with plans to hold a self-determination referendum.

But Freixenet president José Luis Bonet Ferrer, says that businessmen have "the right to worry if politicians create tensions rather than seek dialogue".

For the New York Times, the attitudes of these executives are representative of uncertainty among Catalan business leaders about the idea of a separate Catalan state.

What is clear, according to the daily, is that the bickering between Madrid and Catalonia over who is supporting whom financially, and over whether or not a vote on the independence issue will be held, is not helping matters.

"In any diverse society, there are different points of view, but it’s clear entrepreneurs prefer to operate in a context of certainty," Salvador Alemany, the chairman of infrastructure operator Abertis told the New York Times.

At the other end of the scale are the pro-secessionist business members of FemCAT.

“We can construct a much better economic model for Catalonia than the one that has been imposed on us from Madrid,” said FemCAT member and tourism operator Jordi Bagó i Mons.

Over at Cecot, which represents 8,000 businesses, they are little more circumspect.

President Antoni Abad i Pous said  "97 percent of our members want the current relationship with Spain to be changed, but that doesn't necessarily mean independence".

According to the New York Times, though, most businesses are yet to declare a formal decision in the independence debate.

"The Catalan business voice has remained largely silent,” Xavier Torra of electronics firm Simon told the New York Times, "because most of us understand that, whether people want to be independent or not, we are already part of a completely interdependent and global economy."

But cava makers are playing it extra safe, worried that they would among the first to suffer in the case of a consumer-led boyott on Catalan products from the rest of Spain.