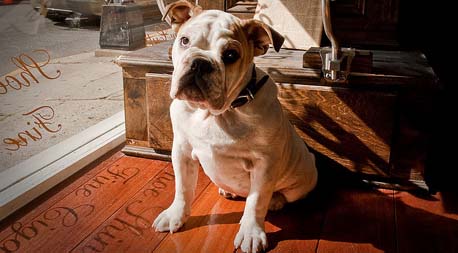 Air Berlin originally offered the passenger a refund and a €100 voucher for future travel when his British bulldog died during a flight. File photo: Jazz guy/Flickr

The airline will also pay Nano's owner, Fernando Javier Ramos, €550 in costs after a court in Palma de Mallorca found the carrier liable.

Air Berlin had originally offered Ramos a flight refund and a €100 voucher for future travel when his dog died during a flight from Seville to Palma de Mallorca.

But Nano's owner sued for the carrier for damages after the pet was left on the runway for 40 minutes before the flight in a cage without food or water.

Airline personnel allegedly told Ramos they weren't allowed by law to give water to animals before and during flights.

After the flight, the dead pet's cage contained faeces, urine and vomit — clear signs he had died of dehydration, according to Ramos' legal representatives.

This was "not just a moral and ethical victory" but a "clear warning that airlines will have to change their protocols for dealing with pets," said  Ramos' legal representatives after the court victory on Tuesday.

"They treated Nano like an object, a suitcase, instead of a living being," those representatives had said before the case.

"This incident is an isolated case which Air Berlin of course very much regrets," the carried told The Local via email.

Air Berlin said it complied with all IATA regulations for transporting pets, and that these were designed to cause "as little stress as possible to the animals".

"Animals are always loaded into the hold of the aircraft as late as possible and their containers are securely fastened down for the journey," the airline said.

"The areas in which the animals are accommodated are temperature-controlled and lit. On arrival at the destination, the containers with the animals are unloaded first and handed over to their owners."

Air Berlin also said owners should assess whether their pet was fit to travel, as a flight can be a stressful situation for any animal.