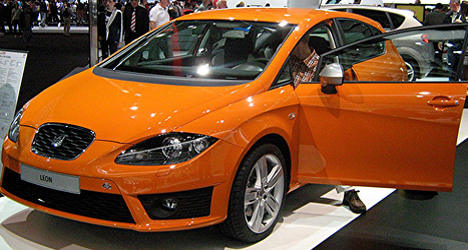 Manufacturers plan to raise production from 2.2 million automobiles this year to 2.4 million next year, an increase of nine percent, said David Barrientos, spokesman for the National Association of Car and Truck Manufacturers (ANFAC).

Although Spain has no automobile maker of its own, it hosts 17 factories run by 10 foreign manufacturers.

As a result, Spain was the second-largest automobile producer in Europe after Germany in 2012.

The industry, which accounts for about 10 percent of Spain's total economic output, aims to boost output to three million vehicles in 2016.

Almost 90 percent of the cars made in Spain are destined for export.

"Domestic demand is beginning to pick up timidly, notably thanks to scrappage incentives," ANFAC president Rafael Prieto said at an industry forum in Madrid organized by ANFAC and consultants PricewaterhouseCoopers (PwC).

"But we have still got a long way to go," he cautioned.

The car industry's sales slumped from 1.7 million in 2007 to 700,000 in 2012, said PwC Spain chief Carlos Mas. "But it managed to fight back by taking advantage of the dynamism of the foreign market," he added.

The automobile sector employs some 250,000 people and is key to the Spanish labour market, stricken by an unemployment rate of 26.3 percent.

Unions have had to cede salary cuts and greater flexibility, however, to lure the production of new models to Spain.

General Motors' Opel and PSA Peugeot Citroen announced this month they would both build their next generation small people carriers in the same factory in Figueruelas, northeastern Spain, as part of the new strategic alliance between the US and French car makers.