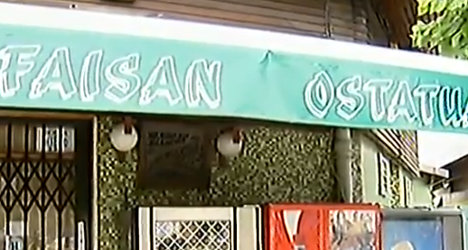 The two policemen denied contacting ETA members to warn them of a police raid planned at the Faisan bar (pictured) in Irun, near the French border. Screen grab: YouTube

During their trial the two men denied contacting ETA members to warn them of a police raid planned for May 2006 on a bar in Irun, near the French border.

The bar, run by alleged ETA member Joseba Elosua, was suspected to be handling money gained by ETA from extorting Basque businesses, according to court documents.

The tip-off is thought to have warned off other ETA members from turning up the following day when they were to be arrested.

The raid had been due to take place just weeks after ETA announced a ceasefire under the then Socialist government in Spain.

The court found the two men guilty of the crime of disclosure of classified information but it dismissed charges that they had collaborated with an armed group.

The two men did not intend to "favour ETA or the terrorist activities of the group" but instead tried to prevent "hindering the process that was underway to achieve the end of ETA," the court wrote in its ruling.

The two policemen will avoid a stint in prison because in Spain sentences of two years or less are suspended for first-time offenders.

Spain's ruling Popular Party has questioned whether Alfredo Perez Rubalcaba, the current head of the Socialist Party who was interior minister at the time of the botched raid, had authorized the leak.

But during the trial Pamies rejected allegations that politicians had ordered the sabotage of the police operation.

Many of ETA's leaders have been arrested over recent years.