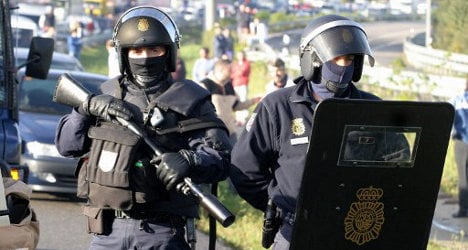 A police assault squad was assembled after a distraught woman said her 20-month-old baby had been taken hostage. File photo: Diego Vega/AFP

Police kitted themselves out in assault squad uniforms after the woman informed them her ex-partner had taken their 20-month-old baby hostage .

The man suffered from bipolar disorder and had a history of abuse and threats, the 31-year-old mother said.

She went on to tell police he had locked her child up in the ground floor of the building where they lived, local daily Diario de Mallorca reported on Tuesday.

When police arrived at the scene, however, they discovered something completely unexpected: a family party full of happy children.

The 'kidnapped' baby was found to be in perfect health.

"You can't do this: you lied to us," the shocked head of the police operation told the mother at the time.

"I know. But it was the quickest way," she replied.

On Wednesday, a Majorca court sentenced the mother to a year in prison for reporting a kidnapping that had never happened.

The judge also ordered her to pay €1,800 ($2,430) in damages to her ex-partner who needed treatment for stress and anxiety after the police assault squad interrupted his family party.

"I thought there must be a hidden camera somewhere," one of the police officers who attended the scene told the court.

He added he thought his colleagues must have been playing some kind of trick on him.

During the court hearing, it also emerged the woman had already visited the children's party an hour earlier on the evening in question.

Witnesses said she punched and kicked at the door where the party was being held before screaming to her ex-partner to hand over their child.

At that point, the father actually called the police who attended and confirmed the child was in no danger.

But the mother continued to beat at the door of the party until police warned her she would be detained if she didn't desist.

It was then that she went to a police station in the city of Palma and made the allegations about her husband, the court heard.

This was despite the fact she knew her ex-partner planned to return the child shortly, the court also heard.